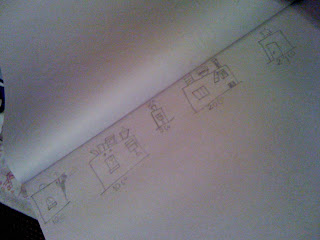 designed. It shows the “factories” that could be built for the

On this snowy day while Daddy was at work:

– Kenny read the daily “Q and A” by himself and wrote his answer.

yesterday. (He drew this game based on his current favourite games on

the iPad: Township (“Kenny Country”) and Hay Day.) This required him

to do arithmetic such as: adding up the number of crops produced and

deciding how much to sell them for; adding and subtracting coins from

sales of crops and products and purchases of buildings; keeping track

of quantities of ingredients, and what new actions can be done as we

progress to higher levels in the game.

– Kenny searched for a video of a Rube Goldberg machine, found one

made using Minecraft, and he was inspired to make his own “Rube Kenny”

world in Minecraft (a game on the iPad).

His character unexpectedly died, which was a bit upsetting. (The

instructions had said you can’t die in this peaceful/creative mode.)

We investigated the cause by searching Google, and (on a Wiki for

out immediately, you will fall into the void (beyond the designed

game) and die, but you can respawn which means you go back to where

you started the game. (We are all just learning how this game works.)

– Talked about the meaning of St. Patrick’s Day and watched short

it had the Eiffel Tower in it, and Kenny wants to do his geography

project on France). We liked it.

– Wrapped and decorated a present (which Kenny had picked) for

Started with exploring the snow and trying not to sink, “using the

principle of mathematics, you know Mama, that the more spread out you

are the less pressure there is on one spot.” So we crawled or rolled

Kenny noticed a supporting board on the sauna porch was loose.

his legs like a plow blade while Mama pushed it.

Then he continued to play his ongoing imaginary, “Star Wars game, you

know, the one I’ve been playing since I was 5!”

This was followed by, “a snowball fight, like we had the other day.”

(That was a fun afternoon too!)

– Back inside: Ate oranges and found another video of a Rube Goldberg

machine in Minecraft, and “checked on Hay Day and Kenny Country” on

the iPad, while Mama started supper.

Mama and Kenny were very grateful to have this time together today.

1 thought on “A Kenny and Mama home day”